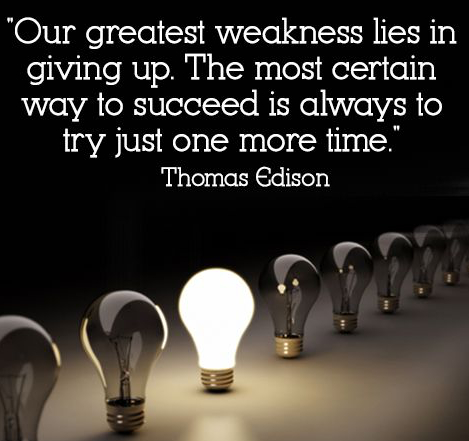 Encouraging Thought: “Our greatest weakness lies in giving up. The most certain way to succeed is always to try just one more time.” ~Thomas A. Edison

Short Story Thomas Alva Edison: Al,” as he was called as a boy, went to school only a short time. He did so poorly that his mother, a former teacher, taught her son at home. Al learned to love reading, a habit he kept for the rest of his life. He also liked to make experiments in the basement.

Al not only played hard, but also worked hard. At the age of 12 he sold fruit, snacks and newspapers on a train as a “news butcher.” (Trains were the newest way to travel, cutting through the American wilderness.) He even printed his own newspaper, the Grand Trunk Herald, on a moving train.

By that time, everyone had heard of the “Wizard” and looked up to him. The whole world called him a genius. But he knew that having a good idea was not enough. It takes hard work to make dreams into reality. That is why Edison liked to say, “Genius is 1% inspiration and 99% perspiration.”