As our nation continues on what appears to be a free-fall descent into lawlessness, there’s only one viable solution: Pray & Commit to Vote. And, as Christ followers, we know the first step to seeing our land healed starts with us, the Body osf Christ.

LET’S GET STARTED: Please commit to pray with us daily throughout the month of October. You can follow along with us when you download our complimentary guide. Each day helps you get started by focusing on a different topic or need in our culture. And should a friend, family member or neighbor share their concerns with you about this election, why not invite them to join you in intervening on the nation’s behalf? Who knows how God might choose to use you — and them — to make Himself known! 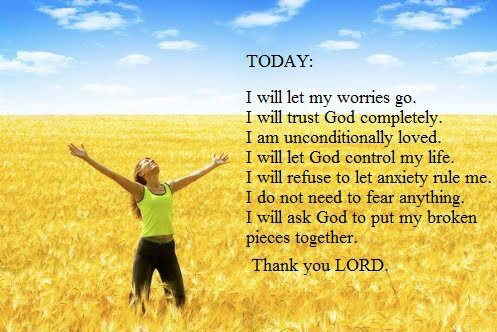 15 years of being a caregiver of his parents have changed Jim’s life. Now He’d like to return the favor.

Pinecrest Retirement Community hos Jim Comer author of a “When Roles Reverse: A Guide to Parenting your Parents.” It;s today at 10:30 a.m. or 6 p.m. at the Pinecrest Auditorium. Pinecrest is at 1302 Tom Temple Drive, Lufkin Texas.

In 1996, Jim;s life took a sudden detour when he was forced to care for his elderly parents. He had to move from California and uproot from his career and life.

Burdens: If the burdens you’re carrying are feeling too heavy, consider if you’re burdened by what God has asked of you, or by what you’ve asked of yourself. Be reminded which is truly paramount. (thedailyverse.com)

“Take my yoke upon you, and learn from me, for I am gentle and lowly in heart, and you will find rest for your souls. For my yoke is easy, and my burden is light.” ~Matthew 11:29,30

Elect Someone: For Elections and Voter Information:

True or False: Eating Sugar Tends to Make Children Hyperactive. Is that can of soda causing your kids to bounce off the walls? You’re probably thinking, “Of course! They’re on a sugar high!” Parents and teachers often claim that eating sugar causes hyperactivity and behavior problems in children. However, numerous scientific studies have examined this claim, and none have found a connection between sugar or artificial sweeteners and hyperactivity. (healthlibrary)

Evidence for the Health Claim – The idea that food can impact behavior was first introduced in 1973 by allergist Benjamin Feingold. Since then, studies have found that parents who expect sugar to affect their children are more likely to perceive their children as hyperactive after eating sugar or drinking sugary drinks than a nonbiased observer would.

Observations of behavioral and cognitive performance factors found that there were no significant differences between the three diets for the “sugar sensitive” children.  There is no evidence that consuming sugar or aspartame can make a child with a normal attention span hyperactive. Although sugar does make energy available to the body, it does not increase excitement or activity.

Six Insurance Tips For Homeowners: Smart ways to lower your premiums. Homeowners’ insurance isn’t a luxury, it’s a necessity. In fact, most mortgage companies won’t make a loan or finance a residential real estate transaction unless the buyer provides proof of coverage for the full or fair value of the property (usually equal to the purchase price). In this article, we’ll show you some simple actions you can take to make sure your homeowners’ insurance is sufficient for your needs. Homeowners’ insurance can be very expensive.  In fact, those in high-risk areas are often forced to pay annual premiums in the many thousands of dollars. But even homeowners in relatively sedate, suburban neighborhoods could pay between $500 and $1,000 a year for a basic policy.  The good news is that although you can’t (and shouldn’t) avoid purchasing homeowners’ insurance, there are ways to minimize the cost. (Forbes)

Here are six ways to make sure you get the right coverage and consequent compensation for your home:

Remember Voting Continues: Vote Early. Would you hire an employee without first looking at their resume? Of course not. So why would you vote for a candidate without first knowing where they stand on the issues? Voters Guide here.

To what will you devote your energy today?

Have you ever contemplated where you invest your energy?  Every minute focused on your misery is a moment you waste moving towards a solution. Every minute you are focused on what you think you can’t do is a moment you could be attempting to do it.  If all you can see is how you have been hurt, how much youlack, how angry you are then you leave no room or energy for healing, provision, healing and love!

Through the World Pastors Day, Believers are encouraged to become aware of their church leaders as examples of sacrifice and a commitment to selfless lifestyles. They are also encouraged to pray for them, to share with them their experience as servants as well as spiritual leaders who carry the burden of their communities each and every day. This can be done by just remembering your pastor in your family prayers, just spending time with your local pastor, spoil your man or woman of God in any way, play with their kids, clean the manse, prepare meals, call and chat with them appreciating their work, anything that one feels like doing no matter how small, it will make a huge impact.

The Future Are Your Kids Prepared: 4 Ways to Teach Your Kids Financial Responsibility (Yahoo/USNews)

While the causes of the financial crisis our nation has suffered will continue to be debated for decades to come, one thing is clear: A major contributing factor to the crisis came about from a breakdown in individuals’ debt and spending habits. The key takeaway for people who would like to create long-term financial health for their families: It is incumbent on each of us to impart the very basics of disciplined personal finance to each member of the next generation. Teaching kids how to manage money is one of the biggest challenges facing parents today. If you can teach your child the difference between wants and needs, how to save, how to create and adhere to a budget, and how one’s personal financial discretion can have a positive impact on the broader community, chances are that your child will know more than most adults.

Here are the top four ways to impart lessons on personal finance and financial responsibility to your kids: